Psychoanalytic Theories comprise several schools of thought that are concerned with the study of the actions and beliefs that are not mediated (and often not moderated) by the conscious mind. Psychoanalytic Theories are most often focused on mental-health disorders. Many of these theories’ core constructs have come to be embedded in Western culture, and some are commonly assumed in prominent educational discourses.

Interpersonal Theory describes seven developmental stages between infancy and late adolescence, each defined according to significant others (e.g., mother; friends; lover), interpersonal dynamics. Failure to meet critical challenges at any stage can result in anxieties that can hamper (sometimes prevent) learning from one’s experiences.

Memetics is a theory of cultural evolution that is focused on the creation, development, perpetuation, and propagation of “memes.” A meme is an idea, habit, song, or any other unit of culture that can be copied from one person to another. The word is derived from roots that have to do with imitation, intended to signal that a meme is analogous to a gene.

Constructive-Developmental Theory focuses on one’s evolving modes of making meaning of experience, starting in infancy and extending through the entire lifespan. It posits five qualitatively distinct and increasingly complex levels/modes/orders of consciousness (i.e., ways of perceiving and engaging with/in the world) across which the individual first develops some mastery over impulses and perceptions, then needs and desires, and then interpersonal relationships. That’s as far as most adults get but some also achieve a self-authoring consciousness, and a few manage a self-transforming, systems-oriented, non-egocentric mode. Because Kegan’s model is increasingly consequential in education, brief descriptions of his identified stages are warranted: 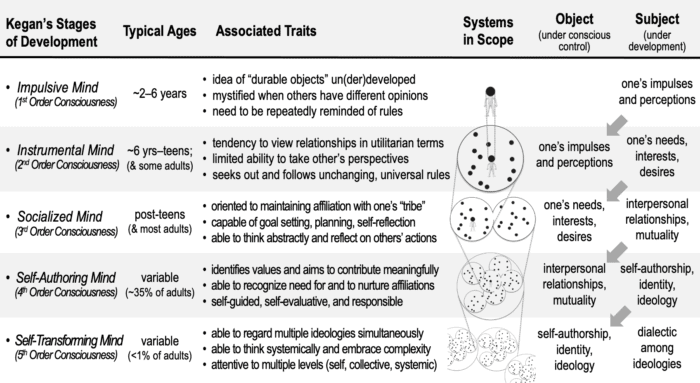 Constructive-Developmental Theory is a theory of learning.

Constructive-Developmental Theory is not a theory of teaching. It does offer occasional advice to educators, however. For example, because its stages aren’t rigidly indexed to ages, Constructive-Developmental Theory is useful for interpreting how and why classmates can make very, very different meanings of similar experiences – along with suggestions on the sorts of experiences and supports that might encourage learners to develop sensibilities that enable them to act in more context-appropriate ways.

Constructive-Developmental Theory meets most of our criteria of scientific theories. Its focus is explicit, its images and metaphors are carefully selected and deployed, and it does have an evidence base.

Please cite this article as:
Davis, B., & Francis, K. (2022). “Constructive-Developmental Theory” in Discourses on Learning in Education. https://learningdiscourses.com.