Constructive-Developmental Theory posits five qualitatively distinct and increasingly complex levels/modes/orders of consciousness, starting with mastery over impulses and perceptions, then needs and desires, and then interpersonal relationships. Some also achieve a self-authoring consciousness, and a few manage a self-transforming, systems-oriented, non-egocentric mode.

Well-Being Discourses are concerned with the physical, mental, emotional, and/or social health of individuals. For the most part, these discourses are more concerned with the conditions of learning than the dynamics of cognition or approaches to teaching. Some consensus has arisen around the assertion that attending to learners’ well-being is integral to all aspects of formal education.

The DIKW Pyramid is a catch-all description of several models explicating the relationships among data (symbols, 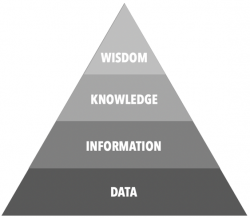 signals, unprocessed facts), information (useful, meaningful data), knowledge (know-how, based on information synthesized over time and across contexts), and wisdom (know-why, an extension of know-how). Most commonly characterized as a hierarchy (hence the pyramid), these relationships have also been described in terms of a chain, a framework, nested systems, networks, and a continuum. The DIKW Pyramid is invoked in many contexts and in many ways – for example, to distinguish between objective and subjective claims, mechanical and intelligent processes, and meaningless and meaningful actions.

There are many, many variations of the concepts and distinctions addressed by the DIKW Pyramid. Variations in terminology, definition, and graphics reveal that imaginings of clear distinctions and logical hierarchies are obvious fictions – although, it would seem, not entirely un-useful, based on the resonance of the model with across so many audiences. To that end, recursive definitions of the levels out of Second-Order Cybernetics may render the model of greater use within education (e.g., data = differences; information = differences that make a difference; knowledge = awareness of differences that make a difference; wisdom = ethical action based on awareness of differences that make a difference). Additionally, several popular discourses foreground “wisdom” as a vital aspect of culture and a potential end of learning – including Constructive-Developmental Theory and many Well-Being Discourses.)

The DIKW Pyramid is not a theory of teaching. However, it is a useful device for distinguishing among educational philosophies and the modes of teaching associated with those philosophies.

The DIKW Pyramid is a catch-all that meets none of our criteria of a scientific theory.

Please cite this article as:
Davis, B., & Francis, K. (2021). “DIKW Pyramid” in Discourses on Learning in Education. https://learningdiscourses.com.