Cognitive Motivation Theories are Motivation Theories that focus on the thought-mediated actions. (contrast with Behaviorisms.) Many models have been developed and researched. Prominent examples include Cognitive Dissonance Theory, Metacognition, Flow, Mindset, Positive Psychology, and Self-Efficacy.

Motivation Theories are attempts to explain the “why” of human action, and most of them are developed around lists of factors. It is difficult to offer overarching categories of these theories, but we find a trio of distinctions to be helpful: Extrinsic Motivation vs. Intrinsic Motivation; Conscious Motivations vs. Unconscious Motivations; Drives/Needs/Desires Theories vs. Cognitive Motivation Theories. Over the past half-century, trends in formal education have shifted from extrinsic, unconscious, drives/needs/desires to intrinsic, conscious, cognitive.

Often used as a synonym to “learning,” memory is more specific and applies to the ability to recall something learned after a period of time. Memory Research thus look at multiple memory systems – that vary according to the type of memory, the location of the memory, the extent of conscious control, the manner of maintenance, the span of preservation, and the role in learning. Several categories and varieties of memory have been identified and studied.

Flow is characterized by intense concentration on an achievable goal or task with deep, yet effortless immersion. Flow requires tasks that promise success and offer immediate feedback. To enter a flow state, one must have autonomy over the situation or activity. A Flow state is an energizing and pleasurable experience during which one might lose awareness one’s sense of self and other things – including time sometimes.

Needs the must be met to enable higher-order learning

Maslow’s Hierarchy of Needs does not speak to the dynamics of learning, and it is thus not especially attentive to the metaphor and imagery that it invokes. While it draws on a range of notions, the Attainment Metaphor is especially prominent:

Maslow’s Hierarchy of Needs falls among Motivation Theories. It categorizes and ranks human needs, based on the assumption that more basic needs must be met before one will be motivated to achieve higher-level needs. The popular version of the model is typically presented as a pyramid that culminates with self-actualization, an excellence-oriented metaneeds mode that can only be engaged if all more basic deficiency needs are met. 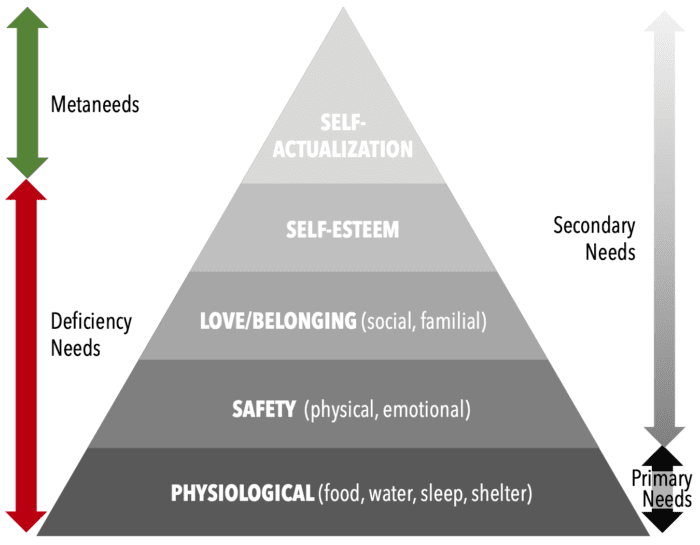 In more detail, Maslow’s categories include:

Maslow also identified each of the above needs as either a Primary Need (i.e., a Physiological Need, see above) or a Secondary Need: Importantly, different levels of motivation can happen at the same time, but one would be most inclined to ensure that lower-level needs are addressed. Associated constructs include: Maslow's conceptions of Being Cognition and Self-Actualization are explicitly linked to a particular type of conscious experience -- on that, to varying extents, might be associated with the following constructs: Many subdiscourses have arisen – some focused on teaching, but many on leadership and management, including:

A first important note about Maslow’s Hierarchy of Needs is that neither the content nor the form of the popular version are especially true to Abraham Maslow's actual theory. For instance, while he did describe his model as a "hierarchy," he saw it less as a ladder or pyramid and more as nested levels, each of which included but transcended previous levels. As well, his highest level was not self-actualization, but self-transcendence. The popular pyramid was actually developed some years after Maslow published his work, in large part for pragmatic reasons by workshop leaders and others who were perhaps more interested in resonance with audiences than fidelity to the author. That said, the strongest criticisms of all versions of Maslow’s Hierarchy of Needs are focused on culturalist and ageist biases. Many assert the model is a “First World” theory that amplifies and privileges trivial concerns. Moreover, it is suggestive of sensibilities and priorities in individualistic societies, and it does not reflect worldviews and motivations (and, consequently, the levels) of collectivist societies. (To be fair, Maslow partially addressed some of these issues with the suggestion of a self-transcendence level, which has some resonance with non-western sensibilities.) Finally, Maslow has been heavily criticized in this work for having appropriated, misinterpreted, and/or mischaracterized the cultural knowledge of the Siksika First Nation, part of the Blackfoot Confederacy.

Maslow’s Hierarchy of Needs can be construed as a theory of learning – or, perhaps more accurately, a description of what must be in place for learners to engage with the sorts of higher-order concepts that are encountered in schools.

Maslow’s Hierarchy of Needs has figured prominently in discussions of formal education for more than a half-century, suggesting that it has been embraced by educators as a useful theory to inform their work.

Maslow’s Hierarchy of Needs is heavily contested. It lacks a robust evidence base and is unable to answer to many observations that contradict core assumptions and assertions. Indeed, numerous researchers have published research that undercut different aspects of the model.

Please cite this article as:
Davis, B., & Francis, K. (2022). “Maslow’s Hierarchy of Needs” in Discourses on Learning in Education. https://learningdiscourses.com.