Embodiment Discourses comprise perspectives on learning that refuse a separation of mental and physical. Mental and physical are understood as integrated and inseparable aspects of the body. Phrased differently, the body is not seen as something that a learner learns through, but as the learner. Correspondingly, behaviors are not seen as goals or indications of learning, but as integral elements of learning.

The Sensemaking Metaphor addresses the ways that people derive meaning from and assign meaning to experiences.

Cognitive Science is the study of cognition in humans, non-human animals, and machines. It brings together psychology, linguistics, computer science, neuroscience, anthropology, philosophy, and other domains. Typically, the foci of Cognitive Science are identified as learning, development, perception, attention, reasoning, emotion, consciousness, memory, language, creativity, and intelligence, and its are identified as better understanding the mind, advancing practical knowledge of learning, and developing intelligent devices.

Rote Learning refers to approaches that emphasize repetition and memorization, with the goal of quick and accurate recall. It is typically encountered in contexts and disciplines where uncritical mastery of a block of information is useful.

Folk Theories exist within every realm of human engagement. They are, in effect, uncritical and often-indefensible principles of action and interpretation that are woven through everyday language and broad cultural sensibilities. In effect, most of the past 150 years of research into learning has been focused on exposing Folk Theories and exploring more conscious and scientifically robust alternatives.

Neuroscience is a multidisciplinary branch of biology that focuses on the structure, functions, and development of the nervous system. With a scope that spans the thousands of distinguishable substructures between the molecular to the cognitive, Neuroscience combines domains as varied as molecular biology, physiology, and psychology (among many others) while it has given rise to many other disciplines.

Types of memory and their distinguishing qualities

Often used as a synonym to “learning,” memory is more specific and applies to the ability to recall something learned after a period of time. Memory Research thus looks at multiple memory systems – that vary according to the type of memory, the location of the memory, the extent of conscious control, the manner of maintenance, the span of preservation, and the role in learning. Some relevant categories on the level of the individual include the following: 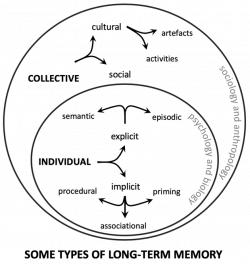 Humans also use Collective Memory (Group Memory), relying on one another and their material worlds to retain memories and maintain collective social identities. Some examples of these Collective Memory include the following: Contemporary insights of Memory Research emerged piecemeal over the last 150 years. Important models in this emergence (listed chronologically) included: Other constructs and subdiscourses associated with Memory Research include:

Perhaps the only substantial criticism that might be made on this topic is that humans tend to plod along without much considering the complex dynamics and the varied strategies associated with memory. Within education, the spectrum of opinion on Memory Research is perhaps most strongly represented by the contrast of proponents of Rote Learning and those who frame learning in terms of the Sensemaking Metaphor.

It would be inappropriate to categorize Memory Research as a theory of learning, but it’s not such a stretch to suggest that any insight into memory is an insight into learning. As such, the information contained in this entry could be construed in terms of learning theory.

Memory Research is clearly not a theory of teaching. However, knowledge of memory systems, their distinct qualities, and their complementary natures could contribute substantially to the theory and practice of teaching.

For the most part, popular discussions of memory frame in terms of Folk Theories (e.g., saving, storing, accumulating). As a general topic, then, it is usually not treated scientifically. As a focus of inquiry within Cognitive Science and related domains, however, Memory Research is scientifically theorized and researched.

Please cite this article as:
Davis, B., & Francis, K. (2023). “Memory Research” in Discourses on Learning in Education. https://learningdiscourses.com.