Extrinsic Motivation Discourses focus on motivating influences that come from outside the learner. The core principles are, firstly, that desirable actions can be encouraged through offering rewards and/or withholding punishments, and, secondly, that undesirable actions can be discouraged through withholding rewards and/or threatening punishments.

Intrinsic Motivation Discourses focus on events and activities that are driven by interest or pleasure in engaging, rather than by external pressures or rewards. Some consensus has arisen around the assertion that there are at least two common elements to intrinsically motivating tasks, namely self-determination (i.e., the actor chooses to engage) and improvement (i.e., the actor must perceive increased competence through engaging).

Classical Conditioning is concerned with studying and affecting reflexive, nonvoluntary behaviors that are not under the learners’ control (e.g., salivation), and it deals with training learners to use neutral stimuli (e.g., a bell sound) to elicit those behaviors. The principal strategy is to present the stimulus when the target behavior occurs so that the learner forms an association between them.

Behaviorisms reject the notion that knowledge is some sort of external, stable, and context-free form. Rejecting attempts to explain learning in terms of unobservable mental processes, Behaviorisms focus instead on observable and measurable phenomena – thus operationally defining learning in terms of changes in behavior that are attributable to environmental factors.

Drawn from and/or aligned with principles from physics (Newtonian mechanics):

Operant Conditioning and Classical Conditioning are two branches of Behaviorisms that are more properly understood as advice on teaching than as theories of learning. Both are concerned with manipulating and managing behaviors controlled by environmental stimuli, although focusing on different categories of behavior and employing different methods. Operant Conditioning is concerned with non-reflexive, voluntary behaviors that are under the learners’ control (an "operant behaviour" is one that produces some sort of effect), and it deals with rewarding or punishing target behaviors to increase or decrease their manifestation. Core constructs of Operant Conditioning include:   The following table provides a truncated list of strategies and intentions to control behavior. 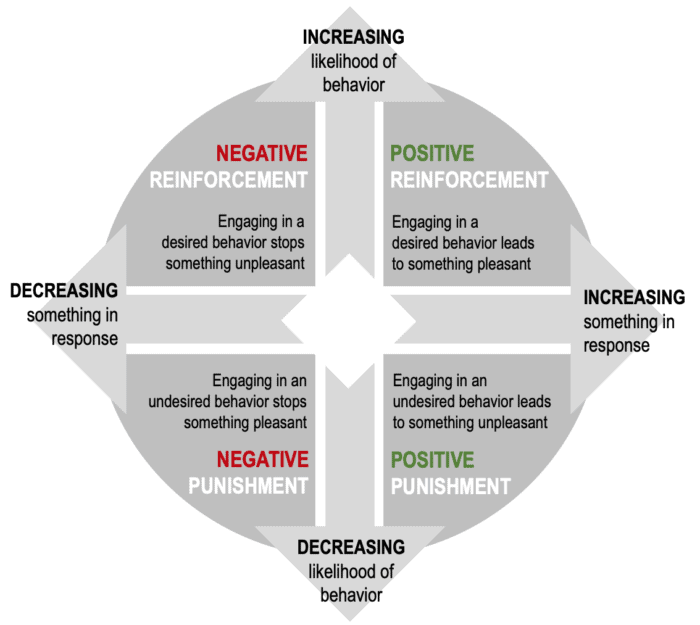 See Behaviorisms for global commentaries, especially as this theory relates to human learning. Three major critiques of Operant Conditioning in particular bear emphasis: Firstly, in recent decades it has become evident that Intrinsic Motivation Discourses (i.e., structures and dynamics that are not external to target behaviors) can be much more powerful for changing and maintaining behaviors than Extrinsic Motivation Discourses. Second, behaviors that are shaped by Operant Conditioning regimes of reward and punishment can be volatile and prone to regression and other distortions – indicating that the underlying metaphor of cognition (i.e., a network of cause–effect links) is not adequate, especially for higher-order functions. Thirdly, effective application of Operant Conditioning training techniques generally requires highly controlled situations with minimum distractions and maximum consistency in the rewarding and punishing of target behaviors. Such conditions simply cannot be achieved in a classroom setting.

Operant Conditioning is not a theory of learning, but advice for manipulating and managing behavior that arises from Behaviorisms.

Operant Conditioning is a more appropriately regarded as a theory of teaching than a theory of learning, and this fact was recognised in the mid-20th century when it rose to prominence in the field of education. With its focus on manipulating behavior, Operant Conditioning falls among mechanistic conceptions of teaching associated with Correspondence Discourses on learning.

The foci, processes, and interpretations of Operant Conditioning are clearly articulated and supported by a substantial body of uncontradicted evidence.

Please cite this article as:
Davis, B., & Francis, K. (2023). “Operant Conditioning” in Discourses on Learning in Education. https://learningdiscourses.com.