Democratic Citizenship Education encompasses those approaches to schooling that are attentive to collective process and cultural inequities. Informed mainly by the social sciences, its principal aims are to promote social justice and productive collective action, in part through recognizing and (where appropriate) subverting hegemonic structures.

Non-Trivial Constructivisms encompass a range of learning theories that invoke a “learning as construing” – vs. a “learning as constructing” – metaphor. The construing–constructing distinction is critical, and it became an issue because the French verb construire can be translated as either “to construe” (i.e., to integrate elements to make sense of) or “to construct” (i.e., to build something).

While there are many, many modes of Premodern Education, we use the term here to refer to the immediate precursors to modern schooling, such as the ancient Greek academy, the medieval university, and the early church school. In these settings, there was a tendency to define formal education in terms of maintaining order and Truth – that is, in terms of countering chaos and immorality.

Standardized Education includes those approaches to schooling that emphasize common programs of study, age-based grade levels, and uniform performance outcomes. The movement drew much of its inspiration and content from ancient traditions and religion, but its main influences have been industry and the physical sciences.

Genetic Epistemology is a theory of the genesis/origins of knowing/epistemology, in which learning is framed as an adaptive process in which the principal criteria of personal truth are coherence among elements of understanding and their utility for making sense of one’s own experience, not match between internal, subjective interpretations and external, objective reality. Cognitive Developmentalism is a key element of Genetic Epistemology.

Authentic Education refers to those approaches to schooling rooted in the human sciences that emphasize personal engagement, learner difference, developmental stages, and personalized learning aligned with individual curiosities and goals.

Activist Discourses are focused on interrogating the entrenched narratives and structures that infuse, lend support to, and help to perpetuate social norms and cultural institutions. Oriented by the conviction that there are no “neutral” acts or ideas, and critically attentive to the collective roots of personal convictions, Activist Discourses aim for deep understandings in order to inform and orient justice-oriented thinking and acting.

Neuroscience is a multidisciplinary branch of biology that focuses on the structure, functions, and development of the nervous system. With a scope that spans the thousands of distinguishable substructures between the molecular to the cognitive, Neuroscience combines domains as varied as molecular biology, physiology, and psychology (among many others) while it has given rise to many other disciplines.

Rationalism positions reason as both the source and the measure of sound knowledge. It begins with the assumption that reality has a logical structure. Hence, all versions of Rationalism privilege formal, deductive logic. Some versions also permit other Modes of Reasoning, provided the reasoner is explicitly aware of the mode being used and the purpose for its application.

Pragmatism, learning and thought are not about internal representations of external reality, but about ever-evolving, experience-based webs of interpretation that channel perceptions, frame actions, enable predictions, and support problem solving. Language, science, beliefs, mathematics, and so on are all understood in terms of their practical uses – not as labels or truthful depictions, but as coherences and useful shared fictions.

Empiricism is more commonly understood as a theory of knowledge than a theory of learning, but the line is often blurred in discussions of education. Empiricism states that knowledge comes from sensory experience, and thus emphasizes the role of experience and evidence. The “hard” version of Empiricism is associated with rigorous scientific research, and the “softer” versions emphasize inquiry, exploration, sense-making, and argumentation.

Idealism might perhaps be better dubbed “idea-ism.” It refers to a range of perspectives that assert that ideas are the only true reality. Most Idealisms accept that there is a material world, but that world is seen to be lesser – subject to change, unstable, uncertain, and corruptible.

Realism is the idea that the one’s perceptions of the world are accurate – that is, one’s senses provide direct awareness of the world as it really is.

Being explicit on beliefs about knowledge

The word Epistemology is derived from the Greek epistēmē (“knowledge”) + logos (“study”) – which might be interpreted to mean that the term is broad enough to reach across all discourses on learning. While that is in many ways true, in the original coining of Epistemology, the following were the case:

The word was coined in the mid-1800s, but the interest is ancient.

Epistemology encompasses all discourses concerned with the nature of knowledge, the scope and limits of knowledge, and how knowledge is generated, validated, enacted, and maintained. In broadest terms, then, Epistemology reaches across every entry included on this site. In fact, the word is often used as a synonym to “discourses on learning” – from which it might be inferred that there are many epistemologies. Modern, western versions tend to be rooted in one or another of the following constructs:

Among these constructs, Epistemology is most often defined in relation to Objectivity, and the topic is generally framed in terms of the concerns of Empiricism and Rationalism. (That detail underpins our rationale for its placement on our map.) There are many exceptions to this statement, most of which are flagged with adjectives or prefixes, including:

To underscore that each of the above constructs represents a significant departure from the original meaning of Epistemology, we have plotted approximate locations on the map at the bottom of this page. In addition, constructs and discourses that might be encountered within (or in association with) contemporary educational discussions of Epistemology include:

One of the important insights across most discussions of Epistemology, as it relates to education, is that “what is learned/taught” cannot be separated from “how it’s learned/taught.” This notion, in turn, has come to be tethered to different models of working in and across disciplines – an insight that has been expressed by such titles as “disciplinary learning” and “transdisciplinary learning.” Rather than surveying those discourses and their thickets of subdiscourses, we offer brief descriptions of some of their anchors – specifically, Disciplinarity, Crossdisciplinarity, Interdisciplinarity, Multidisciplinarity, Pluradisciplinarity, and Transdisciplinarity. This list is not complete, and there is no consensus on the meanings of any of them. In the descriptions below, we have attempted to home in on elements of reasonably broad agreement. We begin that effort with a set of images, which represents our attempt to consolidate and elaborate multiple efforts to develop graphics that highlight critical distinctions. (We recommend an image search for a sense of some of the graphics that have inspired this set.) 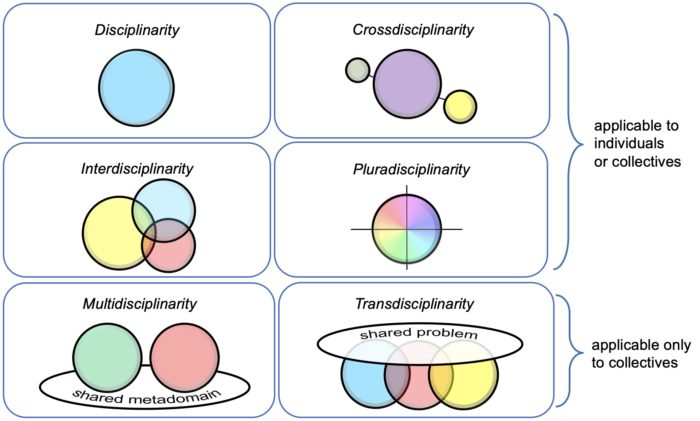 As already signaled, the word Epistemology is interpreted and defined in many ways. Indeed, as evidenced by the examples of “other” epistemologies presented above, the word is sometimes used to label discourses that not only fall outside the original scope of Epistemology, but that reject its defining premises. In other words, care should be taken when using the word. There’s a good chance that listeners will be working with a range of competing interpretations. With that point in mind, the Ancient Greek roots of the word Epistemology signals an important counterpoint:

It turns out that there is great significance in this contrast when it comes to the nature and purpose of the modern school. Whereas Premodern Formal Education was principally concerned more with Gnosis, models of formal education since the 1600s – including Standardized Education, Authentic Education, and Democratic Citizenship Education – have been principally oriented toward Episteme. Further to this point, other traditions have engaged with similar matters in different ways – which is the focus of a companion website to this one (Metaphors of Learning in Different Languages). Illustrative examples include:

Please cite this article as:
Davis, B., & Francis, K. (2022). “Epistemology” in Discourses on Learning in Education. https://learningdiscourses.com.