There is a long history of interpreting learning in terms of the latest technologies. Examples include writing on a tablet, taking photographs and films, and making connections on a telephone switchboard. Brain-as-Computer Discourses represent an uncritical continuation of this trend, through which knowledge is reduced to information and learning is cast as inputting and manipulating that information.

Non-Trivial Constructivisms encompass a range of learning theories that invoke a “learning as construing” – vs. a “learning as constructing” – metaphor. The construing–constructing distinction is critical, and it became an issue because the French verb construire can be translated as either “to construe” (i.e., to integrate elements to make sense of) or “to construct” (i.e., to build something).

Conceptual Metaphor Theory looks at metaphor as a core tool of human thinking. The theory examines how metaphor makes it possible to understand one “conceptual domain” (e.g., idea, cluster of related experiences, set of interrelated interpretations) in terms in terms of another conceptual domain. It also examines how metaphoric associations among domains can orient perception, prompt action, and serve as uncritical justifications for further interpretations.

Embodiment Discourses comprise perspectives on learning that refuse a separation of mental and physical. Mental and physical are understood as integrated and inseparable aspects of the body. Phrased differently, the body is not seen as something that a learner learns through, but as the learner. Correspondingly, behaviors are not seen as goals or indications of learning, but as integral elements of learning.

The multiple interpretations of Conceptual Change in the education literature converge around the point that it has to do with restructuring, problematizing, or replacing an existing conception to give way to a new one. The notion can be applied at the level of individual learning or collective knowledge production, and so the theory draws an explicit, bi-directional link between personal and cultural knowledge.

Cognitivism is explicitly developed around the metaphor “brain as computer.” It thus focuses on how information is acquired, processed, and organized. Learning is seen in terms of integration of new information into existing structures through processes of internal codification.

Modeling a concept to understand its constituent elements, its structure, and how it develops

The notion of “schema” is embraced across a broad range of learning theories. In particular, it is prominently invoked in both Cognitivism and Non-Trivial Constructivisms. The latter are more prominent in the field of education – and the cluster of associated metaphors can be readily tweaked to fit with the brain-as-computer lens applied by Cognitivism and other Brain-as-Computer Discourses.

Schema Theory describes how personal knowledge is elaborated and structured. A schema (pl. schemata) is the network of associations that 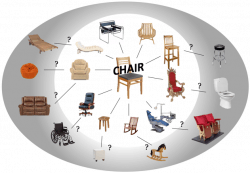 constitutes a concept for someone, and learning is understood as an iterative process of revising schema to maintain coherence in the face of new experiences, information, and demands. One’s current schemata are the principal determiner of what one will learn through subsequent experiences. (The image is intended to illustrate these points for an imaginary person’s schema of “chair.” Objects in the white region will be readily integrated – i.e., assimilated – as chairs; whereas the imaginary person’s “chair” schema will require some adjustment of the current chair schema – i.e., accommodation ­– for the objects in the shaded region to be met as chairs.) One has many overlapping and intersecting schemata that vary in abstraction – covering, for example, words, objects, ideologies, and cultural truths. Important constructs within Schema Theory include:

Within Schema Theory, individual schemata are understood to contribute to and to exist within grander, coherent systems:

As well, in the context of formal education, the following schemata are often mentioned as especially significant: Many other discourses on learning are articulated in very similar terms, including most Non-Trivial Constructivisms. In addition to those, others with particularly strong similarities include: Many efforts have been made to translate and/or incorporate Schema Theory into advice for teachers, with varied levels of defensibility and success. Examples include: The above notions are principally discussed in relation to conceptual knowledge, but they have also been extended to other aspects of human experience:

The most common and persistent criticism of Schema Theory is that the notion is vague. It is not clear what does and does not count as a schema. This point is underscored by the fact that incompatible perspectives (e.g., Cognitivism and most Non-Trivial Constructivisms) embrace the notion.

Schema Theory can be considered a theory of learning in its own right, but it is more often encountered as a component of other learning theories.

Schema Theory is not a theory of teaching, but it does underscore the vital insight that the most important influence on what one will learn is what one already knows.

Because the notion of “schema” is sometimes vague and often contested, it is difficult to argue that Schema Theory fulfills our criteria for a scientific theory. We, however, classify it as such for the meanings applied in Non-Trivial Constructivisms associated with Embodiment Discourses (which is where we locate the perspective on our map, and which generally meet our criteria).

Please cite this article as:
Davis, B., & Francis, K. (2022). “Schema Theory” in Discourses on Learning in Education. https://learningdiscourses.com.