Complex Systems Research focuses on systems comprising sets of agents that form unified wholes in their interactions, relationships, or dependencies. Their emergent, global behaviors cannot be predicted on the basis of the rules governing the individual agents. Definitions and descriptions of complex systems revolve around such terms as emergent, adaptive, nonlinear, irreducible, noncompressible, non-decomposable, multi-level, self-organizing, context-sensitive, and adaptive.

Cybernetics is the study of control and communication among biological, mechanical, social, and/or other systems that can adapt or adjust. More specifically, Cybernetics examines “circular causal” relationships – that is, the sort of looping feedback observed when a system triggers a change in its environment which then triggers a change in the system … and so on.

The study of human society 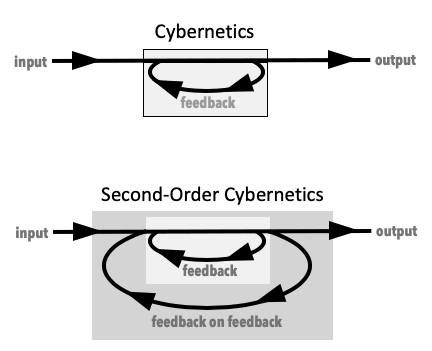 Second-Order Cybernetics is, then, an elaboration of Cybernetics’ core interest in circular causal relationships (feedback) between systems. The interest is extended to include phenomena that can involve feedback to feedback – that is, that have some level of responsive awareness. Second-Order Cybernetics thus simultaneously sparks and addresses issues of autonomy, self-referentiality, knowing, mind, and ethics. Associated constructs include: Aligned and emergent discourses include:

Almost entirely, criticisms of Second-Order Cybernetics are based on either shallow readings or troublesome descriptions/applications.

Second-Order Cybernetics is not a theory of teaching.

Second-Order Cybernetics easily meets our criteria for a scientific theory.

Please cite this article as:
Davis, B., & Francis, K. (2023). “Second-Order Cybernetics” in Discourses on Learning in Education. https://learningdiscourses.com.